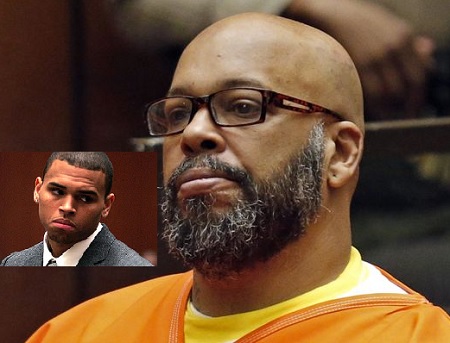 Co-founder and former CEO of Death Row Records Suge Knight is suing Chris Brown and singer Pia Mia, who was hosting a party in 2014.

Sources say that the founder of Death Row Records filed the lawsuit in Los Angeles as he awaits trial on charges he mowed down two men outside a Compton burger stand last year, killing one of them.

Suge claims since the shooting he’s had major health problems.

Knight, 51, claims in his filing that Brown, 27, “was a known gang associate with a history of violence and had a well-documented track record of hosting events and parties in which violence frequently erupted.”

Suge claims breezy’s  pre-MTV VMA Awards event was very professional at the West Hollywood hotspot in August 2014 and his security did a horrible job which is the reason he got shot 7 times .

According to the docs, Knight says Brown and 1 OAK Nightclub should have had better security in August 2014 when Suge was shot multiple times inside the club. He was hit in the abdomen, chest, and left forearm.

Knight’s new lawsuit is seeking damages in excess of $25,000.