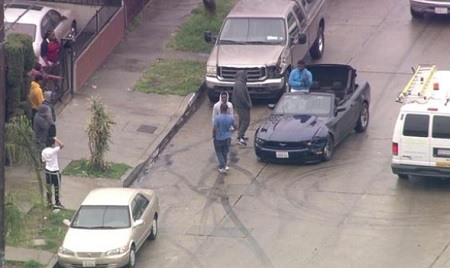 A driver was wanted for burglary in Cerritos led authorities on a high speed
chase through the greater Los Angeles area on Thursday 4/7/2016.

Video shows the burglars at one point doing “donuts” and throwing up gang signs on rainy day in Hollywood while surfacing the streets and then being greeted by by-standers who took selfies with the car in South L.A.

The blue Ford Mustang with a black convertible top was driving at high speeds and was initially reported in the Cerritos area, at least two people were in the car.

Both the driver and the passenger taunted police and CHP officers, often driving on the wrong side of the road, doing donuts, standing up and looking around at the helicopters overhead as the chase moved from South LA to East LA, through Hollywood, the Hollywood Hills and back to Hollywood.

Initially, LAPD made several attempts to pull over the car, and continued to track the vehicle while staying just short of a full pursuit on downtown freeways.

Sheriff’s deputies arrived at 3:30 p.m. and took the driver, passenger and an unknown third man into custody.

A large crowd gathered near where the men were arrested.