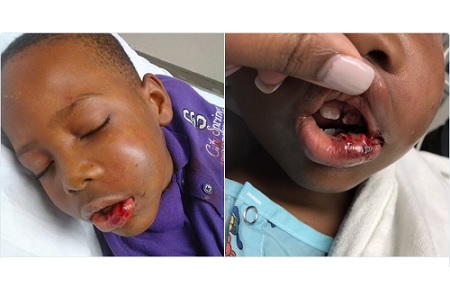 A 7-Yr-Old kid was hospitalized  this morning after being assaulted by his assistant teacher at City Springs Elementary School in East Baltimore.

In a police report Travon Grayson mom says that when she got to the school her son was in an ambulance and the assistant teacher was there with blood on his clothes..

Baltimore police media relations Chief T.J. Smith said video of the incident shows the boy being slammed by a man.

“The video does show him carrying the child and slamming him up against the wall, and it’s very difficult to watch. We cringed a number of times as we watched the video,” Smiths said.

Smith said the boy’s body went limp after the assault.

“It’s never appropriate to inflict this type of harm on a child,” Smith said. “That video basically made our investigation pick up that much more. It showed an assault, and it showed this 7-year-old boy in school being slammed about by this 25-year-old man, and I’m being nice by calling him a 25-year-old man.”

“To fracture his face and make his teeth fall out, a 7-year-old cannot do that to himself,” Jackson said.

A spokeswoman for Baltimore City schools issued a statement, saying that the school system is cooperating with a police investigation.