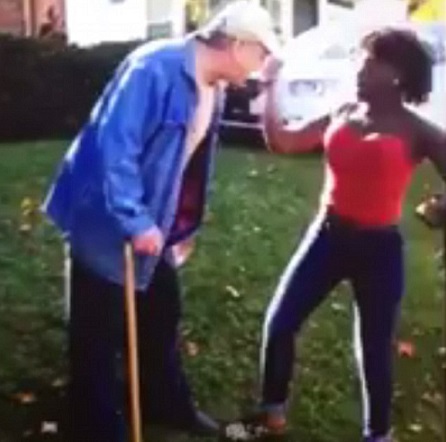 Two teen girls were arrested after a disturbing facebook video showsthem assaulting a 62-year-old Syracuse man who simply asked them not to sit in his yard, police said.

The 14- and 15-year-old girls both punched the man, who walks with a cane, and ran away with a large group of teens laughing as the man gave chase but tripped and fell, according to the video posted to Facebook Wednesday.

“I have given it to the local Syracuse news & police who I hope will get justice for this man,” the Facebook user who posted the video wrote. “This is sad, ignorant & disgusting!”

The man had politely asked several girls to leave the front yard of his Glenwood Ave. home around 3 p.m., Syracuse police told The Post-Standard. Yet the two girls responded by smacking him twice in his face, police said.