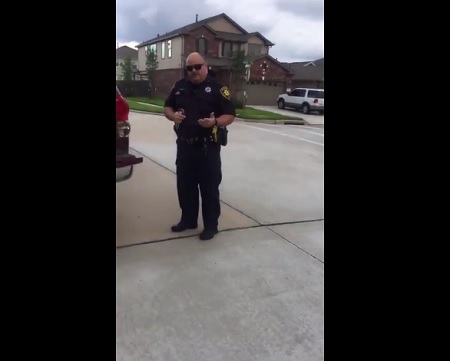 The 19 year old entrepreneur involved was out earning a living by providing landscaping services in a Houston area neighborhood.

He was soliciting additional business by leaving his card on the doors of homes. Law enforcement believed that this activity gave them probable cause to investigate the young man for a crime. He was understandably upset when LE approached and began questioning him and could not articulate the reason for the suspicion he was in the act of committing a crime. However, he remained respectful. They asked for his identification. He provided his name and date of birth and in return asked for the officer’s card and identifying information (which he was entitled to).

The officer failed to comply with this lawful citizen’s request and instead retrieved a set of handcuffs from his belt and attempted to detain the young man. This attempt was unlawful, unconstitutional and (frankly) idiotic. I’m aware that this took place and was caught on camera. My office would be happy to investigate this further on behalf of this young man. Someone from his circle has reached out via social media and I have forwarded my contact information. All of us already know that the officer is going to say that the young man appeared agitated and he began to fear for his life and so he thought it appropriate to shackle this working citizen.