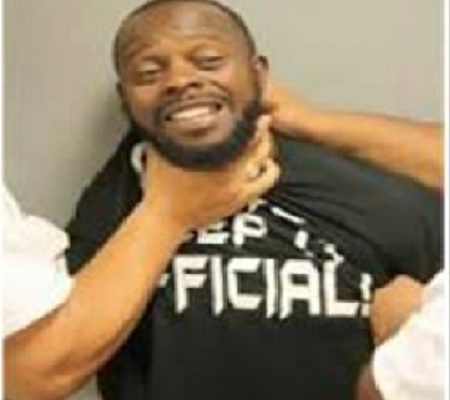 A Texas Houston man is suing Harris County Deputies  for Choking by him for Smiling During Mugshot!

Christopher Johnson is going after the big bucks after claiming two officers assaulted him as he was being booked for suspected drunk driving last summer.

He says he was choked for half a minute during the July 25, 2015 booking process.

Johnson, who says he always smiles in photos, was allegedly berated for grinning in his mugshot by a deputy who said ‘Take the picture right’ and ‘Man, stop smiling!’ ‘This is how I always take my pictures,’ Johnson says he replied.

Next, a second deputy stepped in, and joined the first officer in choking Johnson.

The bizarre mugshot shows Johnson smiling as two men hold him by the neck.