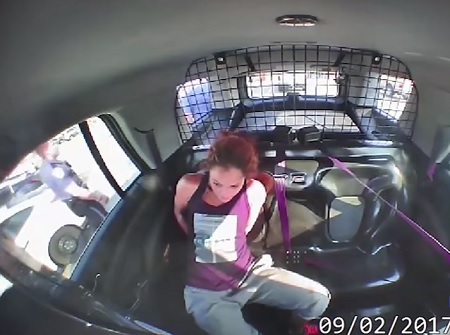 Law enforcement officials have identified the chase suspect as Toscha Sponsler, a 33-year-old Alto native who is now under arrest with multiple charges,

aside from her unauthorized use of a motor vehicle. Police report that the call that originated this incident was for a suspicious person and/or possible shoplifter at Ulta. Sponsler left the store on foot and eventually was put under arrest near South First at Loop 287. She was handcuffed behind her back and buckled up in the back of a police unit to be taken to jail when she slipped out of one of the handcuffs, was able to get out of the seatbelt and climbed through the vehicle’s sliding partition window.

After getting through the window, Sponsler gained access to the driver’s seat. While she was trying to escape, officers were standing behind the car, searching through a backpack and purse Sponsler had tried to ditch when the police vehicle almost backed into them and drove away. The suspect led police units on a chase down Loop 287 at Tulane to Whitehouse and to various other roads at speeds that reached roughly 100 mph, almost making a head-on collision with two Lufkin officers, Constable Chad Wilson and several other drivers.