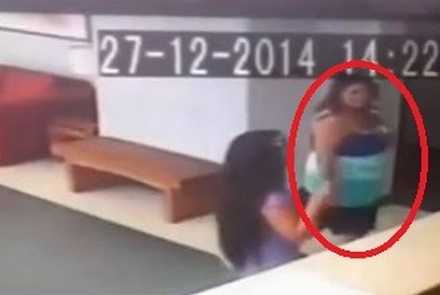 A South American woman claims she was shoved over by a ghost in an incident captured on CCTV camera.

Speaking to media in her homeland Chile, Cecilia Carrasco, 34, said she had been walking past the reception desk at her lawyer’s office when she felt herself pushed.

Now, Cecilia is afraid to leave the house as a result of her terrifying ordeal.

She said: “I hit the ground hard and had to be taken to hospital in an ambulance . I was inside for three days and I’m still off work as a result of my injuries.

I wasn’t aware of anybody in front of me as I passed the reception desk talking to a girl, and as I looked towards the receptionist I suddenly felt two pairs of hands shove me over.

“I hit the floor but when I looked up I couldn’t see anybody, and I thought they probably had run off.

“When the receptionist told me that there was nobody there, I didn’t believe them until they showed me the footage. Now I am convinced that it was a ghost because I felt the hands even though there was nobody around.”

She said she had never believed in ghosts and never expected that she would be at the centre of such a paranormal attack that meant she was now frightened about going out of the house.

She said: “I remember seeing a film where a ghosts kept attacking a woman and now I’m worried the ghost might be after me. I have no idea why I was shoved over.”

Video: Footage Captures Woman Pushed Over by a GHOST