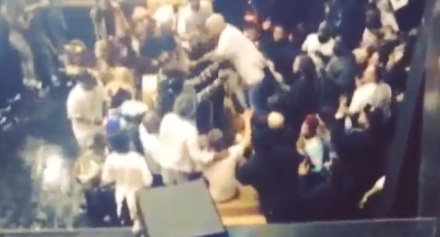 By TMZ: The man who shot Suge Knight and 2 others at a pre-VMA party early Sunday is on tape clear as Knight — problem is … so far the eyewitnesses are clamming up.

Law enforcement sources tell TMZ … 1Oak has a sophisticated surveillance system that covers almost the entire club, and at least one of the cameras clearly shows the gunman firing the shots. We’re told the shooter’s facial features are clear enough to make out.

As TMZ first reported … cops are zeroing in on gang rivalry as a motive. Suge and Chris Brown — who were inside the club — make no secret of their Bloods affiliation. The Game — who was denied entry — also wears his Bloods affiliation on his sleeve.

We’re told none of the witnesses want to be the person who fingers the gunman — for obvious reasons.

We’re told cops still have others to interview — including Suge, who is currently sedated.

If all else fails, authorities may release the video so someone in the public can come forward — almost certainly anonymously.