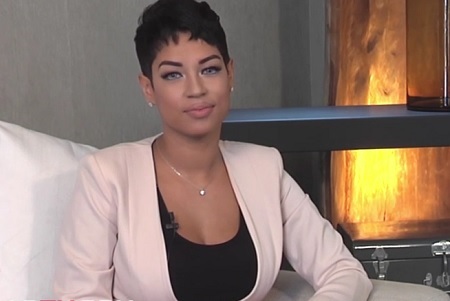 “I didn’t realize who he was when I gave him my information,” Zashia Santiago recalls when asked how she met her boyfriend, rapper Safaree. “I don’t follow pop culture as much as people would believe. I listen to country,” she adds with a laugh.

The budding actress/celebrity makeup artist was pursued by Mr. Samuels on the Wild ‘n Out set. Since the two made their first public appearance, the new couple continues to show their love for one another via social media, despite the negativity thrown their way from Nicki Minaj’s “Barbz,” the superstar’s ultra-devoted fans. Zashia knew she’d “have to deal with it” once her and Safaree’s relationship became public knowledge, and according to her, “it’s going pretty well.” The stunning beauty claims they’ve received tons of support and encouraging words from her and Safaree’s fans collectively. “Positivity has waved over all of that negativity,” she says. When asked about the comparisons she’s been getting to Nicki, she tries not to feed into it being that they’re “two completely different people.”